Alan Adler was a Maker long before anyone ever used that term. The 75-year-old is the mind behind the Aerobie flying disc, which became a hit toy in the 1980s and 90s, and also the AeroPress, perhaps the most-beloved new coffee maker today. Sales for both are in the millions.

In a delightful new interview with Medium’s Backchannel tech section, he reveals some surprising things about his path to success.

Here are five things this inventive man has to teach us that we feel, truly make him a maker worth making note of.

1. Making Starts at an Early Age

Adler came to making early. No, he wasn’t building vacuum press coffee pots or engineering world-record-breaking toys, but he was creating things that made him happy out of what he found in the world around him.

“As a child I made things out of very primitive stuff, whatever I could find. I would scotch-tape a nail to the railroad tracks near our house and when the train ironed it out flat I would take it and I would file this flattened piece of steel a little bit and make a little handle for it and make a miniature sword.”

As a true entrepreneur, he took what he made and traded it for things he wanted from his friends. The seed of creating was firmly planted as a small child, and the opportunity for investment and gain as a direct result of what he created, was recognized immediately.

2. Parents Can Shape a Maker

When you’re surrounded by those who “do,” it seems you begin to “do” yourself. A maker is often born from makers — which is why you see traditions of creating span several generations.

Adler’s early contact with making and building started at home by observing one of the people he admired and learned from the most, namely his mother.

“When I was around eight, my mother took a course that was given for housewives on how to make repairs around the home. She was taught how to replace a plug on an electric cord and a washer and a faucet. And she taught me how to do it.”

You observe those you believe know best, and go on to take what you’ve learned from them into the life ahead of you. How many of us learned something from our mothers or fathers many years ago that we still hold as absolute truth and the only way to do things?

Some may be surprised to learn that Adler didn’t attend college — in fact, he never really showed a keen interest in the discipline of school. That’s not to say he didn’t have a passion for learning. For Adler, however, learning came from doing. He absorbed himself in books, got his hands dirty and set out to create immediately. He strove to lean by doing. The coolest part? Although he never attended university, it didn’t stop him from teaching at one – quite a reputable one at that.

“I taught at Stanford for many years. I taught a course in sensors and also mentored mechanical engineering students and I still lecture there,” he tells Backchannel.

Adler may be the exception to the rule that says “those who cannot do, teach.” It seems not only can he “do,” but he taught himself to do it.

4. If You Don’t Like What’s Out There, Make Something Better

The invention of both the Aerobie and the AeroPress came from his dissatisfaction with what the current market had to offer. In Adler’s opinion the Frisbee was fundamentally flawed in its design. It was too thick and heavy for an object intended to fly far into the distance.

And the AeroPress? Well, he found it terribly disappointing that brewing a single cup of coffee in a drip coffee machine lead to a less than tasty experience.

Adler’s dissatisfaction lead to action. It lead to tinkering and testing and dozens and dozens of failed attempts. It also lead to creating a record breaking disk with a hole in it that flies further than any frisbee and arguably the best single-brew cup of coffee around.

The path to sublime single-brew and flying object success wasn’t a short one. Adler spent years pitching products to countless companies, with little to no success. From a portable lamp to a toy called the Slapsie, he experienced everything from outright rejection to maybes that turned into mediocre successes. The AeroPress itself went through 40 iterations, and the Aerobie was actually a Skyro before it went through one final, vital change, which turned it into the wildly popular end result.

Even now, Adler is still trying. He is constantly striving to come up with new and clever ideas that improve the world he lives in – and by extension, the one we do too. 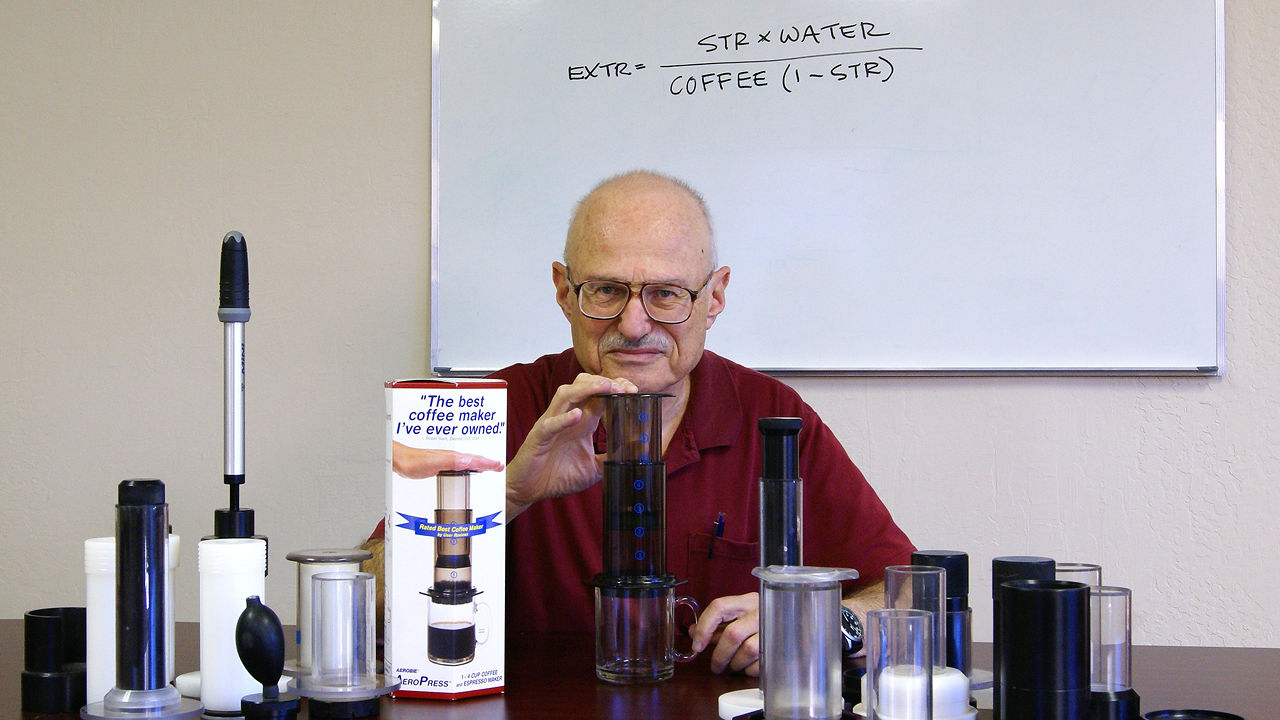